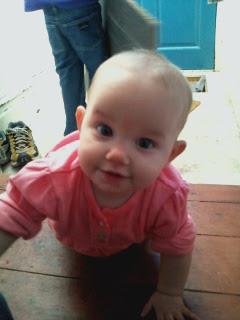 My baby was one last Friday. I am so excited – this next year of development is just the best. Walking, talking, laughing, playing, it all seems to kick in in the second year of life. I love the little tiny cuddly baby stage (come to think of it, I haven’t yet found a stage I don’t like) but I just can’t wait till the next bit to discover her personality and be able to interact with her more. I really wasn’t like this with Rocky at all. I just wanted him to stay as a little baby forever and hated the thought of him growing up. With Baby, I feel like I did the first time round – enjoying the current stage but still impatient to see what will come next. Maybe it’s because I feel like I’ve been immersed back in the baby stage for too long now. With Rocky I think I was so amazed at remembering how much easier it was to have one baby at a time!
Or maybe because I’m intrigued about what it’s like to live with a little girl. I find it so weird after being surrounded by boys for so long to even entertain what a girl (as opposed to a baby as she is now) will be like in the house. Contrary to popular belief, a girl was not my aim. Lots of people will assume that we had so many children because we were trying for one – nope, we’re just that crazy! I wasn’t opposed to the idea of having a girl, but I don’t think I was ready for it either. When we suddenly went from having one boy to three boys, I firmly put the idea of girly things out of my head. I automatically bypassed all the girly aisles in the clothes shops and had gotten used to choosing toys and activities based on their sturdiness and easiness to clear up afterwards rather than their attractiveness and creative bias. It didn’t particularly bother me, because I was never a very girly girl myself. I did have one Barbie (decapitated hours after my birthday party by one of my brothers) and a dolls house that my granddad made for me (which had all its window boxes pulled off within a week by my other brother) but in general I liked more imaginative and adventurous things than fairytale romance. I loved Enid Blyton books (except for the girls’ schools ones) and hated wearing dresses.
So it really surprised me when I got home with my new bundle of joy in her yellow unisex babygro (who had been sleeping an NHS blue blanket for two days) and stepped into a world of pink. Richard had been gradually receiving cards at the house and setting them on the mantelpiece, then the sideboard, then the table – and they were all pink! My sister-in-law had brought her moses basket all freshly cleaned and set up in the corner. It was pink. There was a pile of presents waiting to be opened. They were all wrapped in pink. When I opened them, they were full of pink. Pink babygros, pink blankets, pink teddies, pink dresses! It still didn’t really hit me because it was all so familiar. It was my mum that brought it home. She arrived with more pink packages full of pink things. And then she handed me a little bag containing a heavy box. I looked inside and there was a little box set of four books. These were new ones, but copies of books that I had read as a child. Not only that, but my mum had read them as a child too. They were the stories of Milly Molly Mandy, written between the 1920s and the 1960s and were tales of picnics and thatched roofs and grandparents that lived in the family home and friends who lived up the road in the village and even – these were my favourite bits – contained the maps of where all the characters lived. I can’t even remember what happened in the stories or what made me love them so much to begin with, but when she presented me with this blast from my past, I promptly burst into tears and wailed ‘I’ve got a GIRRRL!’ 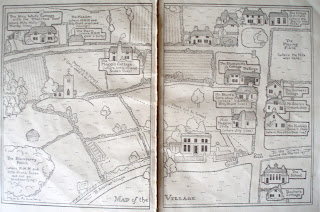 My second epiphany came when I went to Next when she was about six weeks old. I’ll admit that I have for a long time harboured an assumed distaste towards all things girly. From my surreptitious glances towards the girls section previously, there seemed to be so much more plasticky, naff stuff around for girls than for boys, and it was all covered with glitter and fluff and the word ‘princess’. I had a couple of outfits that we’d been given double of, so I thought I would go and do straight exchanges for the next size up and then leave the shop. Instead I found myself, once having crossed over the unseen divide from the boys' side of the floor (two racks) to the girls’ side (entire rest of shop), in a complete state of shock. I didn’t hate what I saw at all. I loved it. There were so many more things to choose from! There were dresses and skirts and leggings and boots and tops with ready made layers built in – and tights! (I have discovered an unexpected love for tights with the way they frame those chubby little legs and, unlike all other footwear on pre-walkers, they actually don’t fall off). I stood and stared at it all for so long that a sales assistance came over to see if I was okay. I whispered that I was in a parallel universe and was having an out of body experience. Or something like that. Eventually, I managed to narrow my choices down from ‘the whole shop’ to just a few items that only came to three times the price of the items I went in with. When I rang Richard and told him what had happened, I don’t think he could believe that his previously tight-fisted, shopping-hating wife was falling to pieces over a few pieces of pink patchwork fabric.
I imagine that these things are just the first in a long list of new experiences I will come across as she gets older. I’m thankful that I get a long period of adjustment – so far the only difference at this rolly polly tactile stage is that she is, as the books predict, more interested in faces than her brothers were at the same age, which seems to mean that I have to keep her fingernails extremely short as she loves to grab handfuls of anybody’s cheek, lip or hair if they come too close.  This I can deal with, but the idea of the future – of the added emotional reactions, self-analysis and social pressures that seem to come as part and parcel of having a girl – well quite frankly, that side of stuff terrifies me. I think that is the reason I have always been so much more comfortable with having boys. They seemed to be little bundles of life, energy and determination that come into this world just waiting to be given a direction and fuel to keep themselves going and comfort inbetween crashes. Girls – they seem to me to be a whole different type of creature, needing much more detail and consolation than that. And – here’s the bit that scares me the most – when she gets older, am I going to look at her and see myself reflected in her more than I do in the boys? Will it be like watching a piece of me walking around, making decisions and going her own way? How do you let that happen?
And - oh my goodness - what if she actually chooses to like High School Musical and wants me to watch it with her? *boak*
What was I saying about being impatient for her to grow up? I think I'm pretty happy where she is right now actually, encased in those lovely little chub-enhancing tights.
Happy birthday Baby Girl  xx