We had another mixed up weekend. Scooby had continued to deteriorate all week, until he could hardly function on Saturday. He had several localised seizures in his face and hands, and was so shaky that he couldn’t hold a drink to his mouth without it spilling. Eventually we took him to the local hospital, although we weren’t sure they would be able to do anything. We were really glad we did though, because he got the point where he couldn’t speak at all, then finally had a full body seizure while we were there. Thankfully he slept really well and when he got up the next morning, he was able to move around fairly normally again and we came home at lunchtime.
Tomorrow we go to see his consultant in Manchester, and depending on what they see when they assess him, we may stay in for a couple of nights. I’ve packed up just in case.
Unlike us, Scooby is very excited about this due to the enchanting beings they have in the Royal Manchester Children’s Hospital known as play specialists. These are people who hold the keys to wonderous cupboards of stuff in endless supply to keep children entertained, and give gifts galore (like colouring sheets and activity books) to help take their minds off their current situation. My only complaint may be that these people are too good. Once exposed to their wonder, children become entranced and forget everything about the trauma of hospitals – the needles, the tests, the lying still for brain scans – and begin to beg to go back again. They there are trying to recover at home with their boring old usual toys that they’ve had for months (or even years) and – even worse – they have to share (share!) them with their siblings too. And as for mum, who always seems to be too busy doing unnecessary tasks like cooking food or folding laundry, she can’t hold a candle to John from ward 78 who has all the time in the world for Junior Monopoly and games of bowling on the Wii.
So although we are hoping to come home straight away again, he will be vying to stay. Either way, someone will be happy by the end of tomorrow.
Just in case, I’ve stashed my new Jodi Picoult book and my hardly used DS in the overnight bag too  – well John can’t be expected to occupy everybody at once, can he? 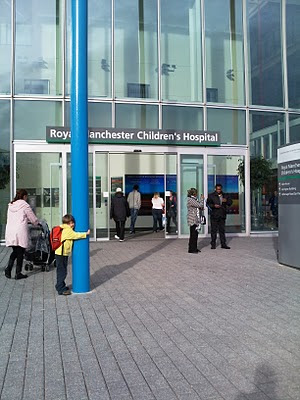