The most unnerving thing for Richard and I since Monday has been that we are together without Scooby. So much of the last several months has been spent apart, but when we weren’t with Scooby, we knew that the other one was. 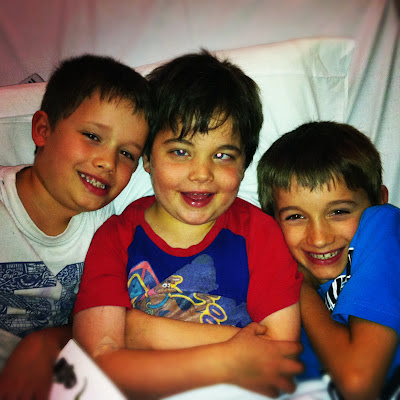 The boy has never been alone – never without another family member by his side. As a twin, he came into this world with instant companionship, and he and Ace, and usually Turtle (who called Scooby his best friend) too, went through every life experience together – nursery, preschool, school, trampolining club, etc – until he first went into hospital aged six years and four months. Then the dynamic changed – as Ace learned to manage without his birth buddy by his side, Scooby got used to always having a parent with him as an inpatient and an outpatient in hospital. When his seizures started, around his seventh birthday, Scooby was no longer able to join Ace for ‘normal’ activities like school trips or swimming lessons. I had to accompany him, with a baby and toddler in tow, for any extra-curricular activities and watch him like a hawk, and eventually as his abilities depleted, his world shrank to consisting of home and hospital. Since his eighth birthday, he was unable to do anything for himself at all, and was extremely unstable, so Richard or I were constantly by his side. We got used to doing nothing together and settled for just handing over batons to each other. If we weren’t with Scooby, that meant that the other one was. We were either on high alert with him, or looking after the other four at home. Setting the table for five instead of seven was fine, because that meant the other parent was with him.

So the first time we set the table for six this week was incredibly hard. Looking at each other at home and knowing that meant neither of us was with him felt so wrong. Allowing him to make the biggest journey of his life, from here to eternity, has gone against every instinct that has been in us since his birth.

Although it wasn’t an easy transition, we have turned our world upside down in order to take care of our extremely disabled child. We have sacrificed normality for the hope of keeping him alive and saving him from this terrible disease. We chose to close many doors and make our world smaller, so that we would have the privilege of being his carers, for as long as he needed us to be. I never thought that pushing a eight year old child around in a wheelchair, cleaning his skin daily, changing his nappies, feeding him, willing him to speak and respond, and throwing our arms around his shaky body many times a day until his seizures passed, would feel like a privilege, but it really and honestly was. Until the last week, when he couldn’t communicate at all, he never stopped being the Scooby that we knew and loved. And so no chore, from cleaning and bandaging his blistered skin, to enduring many many interrupted nights, was not worth being with him. Not because we are saints, nor because he was one (some mornings he had a lot of apologising to do after being ratty in the night), but because we got the chance to experience a love that goes way beyond squeamishness or inconvenience, and we knew it was more than worth it.

In one morning, we have our marriage and our future back, and our very tiny world has been thrown wide open again. This is about as unnerving as an agoraphobic stepping out of a caravan and onto a gigantic festival field. I would go back in a second if it was an option. I have no idea how to make decisions about the future ever again. There are too many options, too much space, too high a price to pay for our freedom. Without knowing God is the author of all things and that this is all part of a higher plan, I don’t know how we would move forward.

But Scooby will never ever be alone. Scooby has gone on, to the Parent who loves him more completely and faithfully than Richard or I ever could. God’s arms are stronger, His abilities greater, and His comfort far more amazing that what we have had the chance to offer our boy. His life now is completely fulfilled. I cannot imagine Scooby without his two brothers eitherside of him while he runs and laughs and becomes all he was destined to be. But I know the truth of the Word, and that is what I will stand on.

Because we are not alone either. Although we cannot yet see Him face to face, we can still know the God of all comfort, and the Prince of peace. We can trust in His plans when we have none. There is purpose and a future in all of this. We are, and will be forever, never alone.
Labels: Beyond Scooby Heaven