Bible In One Year

Last January I was chatting to someone who had had a really rough year. We were chatting about the tough situations she had faced, many of which were still not resolved, but at the end of the conversation, her face lit up. “There is one thing that I’m really proud of though,” she said, as she got out her phone to show me. “I managed to read the whole bible and never once missed a day, even with all that going on.” She showed me her bible app, with an unbroken streak of 365 days. As she told me about how much it had helped her cope with everything else that had happened, and how it had kept her perspective healthy, I felt inspired. She had every excuse to have not even tried that with the year she’d had, but it became one of her highlights.

When I got home from church that afternoon, I thought “I want that to be me this time next year.” I couldn’t forget the joy in her face as she’d told me about it, and I realised it had been a long time since I’d read the bible from start to finish in one straight run. I’d tried a few times in the past, but had only successfully done it three times, and the last of those was over fifteen years ago. Usually, I studied the bible book by book, so I’ve probably covered the whole bible a couple more times that way, but it means that it’s been years since I read some of the books now.

It was already halfway through January, but while the inspiration was there, I threw myself into it, reading half of Genesis that afternoon. For the rest of the year I have played catch up but in a weird way that has helped me - starting from scratch means aiming for perfection, which is easily lost. Catching up and varying the amount I read each day somehow fitted better with my approach to things. 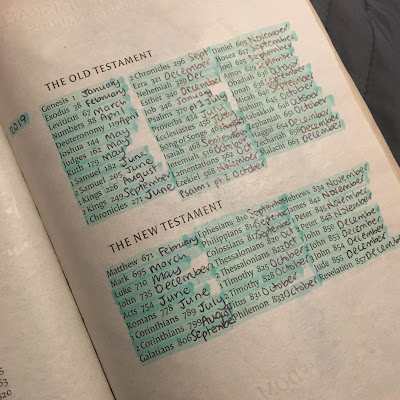 I love variety, and so it needed to be different to my current usual approach to bible reading. Since beginning bible journaling three years ago, I have been going slow and steady with individual books of the bible, using commentaries, a journal to write down thoughts and observations, and then adding lettering and colour to the pages to meditate on specific verses that meant the most to me as I studied it. This method means each book of the bible has taken me weeks or months to finish. 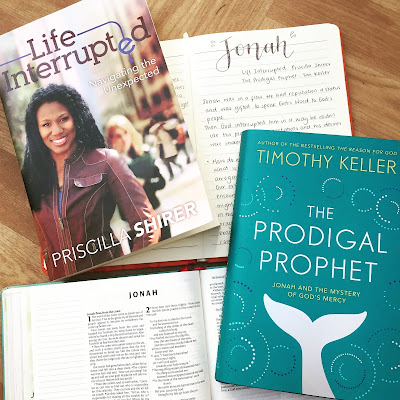 So to get through it in a year, I got a spare bible off the shelf. It was a free one I’d been given at a conference (which actually had quite a few printing mistakes in it!) I knew it wasn’t one I’d come back to over and over again, so it didn’t matter what it looked like at the end of the process.

I began a messy bible journaling process, where I just wrote what stood out to me as I read it. With a variety of different biros over the year, I underlined, circled and scrawled alongside the text. With highlighters that bled through, I used a system to help me remember what to focus on as I went:

Green: God’s voice, for instruction, encouragement and promises
Pink: God’s voice for warning or consequences
Blue: whenever the Holy Spirit was mentioned
Purple: Human reactions and choices, good and bad
Orange: Cross-referencing (where one part of the bible is also mentioned somewhere else)
Yellow: Miscellaneous - anything else that has grabbed my attention that doesn’t fit into the other categories. 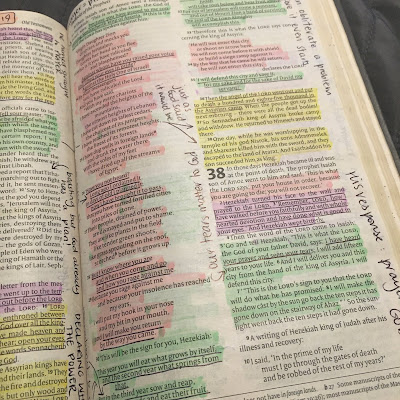 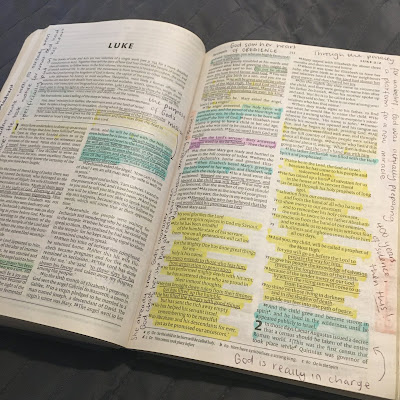 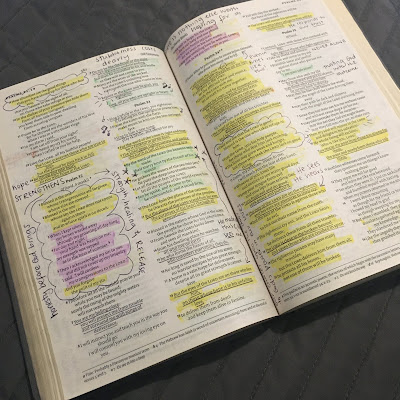 There are so many ways to read through the bible in a year now, including the YouVersion app that my friend used, or listening to it on an audio app. I know my own concentration ability, and I don’t seem to remember what I’ve just read or heard without a pen in my hand. When I interact with words by underlining or adding colour, it seems to connect with different parts of my brain, and makes the information sink in. It really worked for me.

Last time I read through the bible, I used a slightly different method: after every chapter I tried to sum up what I’d read in about two lines. It was a great way to make me think about what I was reading instead of blanking out. 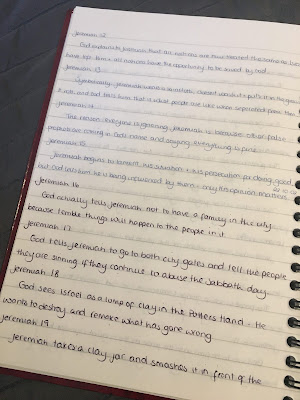 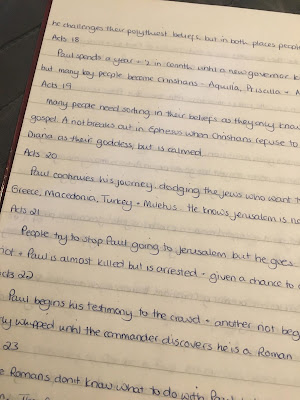 There were many points this time when I didn’t think I’d be able to do it in a year. I thought a few times that maybe I’d be better aiming to do it over 18 months or two years. That would’ve been fine - the point is to do it after all, rather than not doing it - but the thing that kept me going was imagining myself in the final week of December, and the satisfaction of being on the home stretch, knowing that I’d pushed myself to do it.

And here it is - the final moments of Revelation! I am SO glad I’ve done it. I’ve learnt so much and felt like it’s spoken into my life even doing it at speed. Sometimes I found on a Sunday in church I was worshipping all the more because of the fresh thoughts about God that were in my head from what I’d read that week. So if you’re thinking of reading through the whole bible this year, I hope this image will help you to keep going, just like the conversation with my friend did for me. 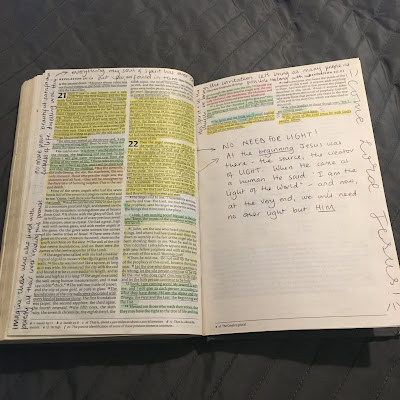