When I went to buy advent calendars at the end of November, I was thinking about the cost and where they would go. Last year we had to shove them in a high cupboard because two-year-old Rocky couldn’t possibly keep his fingers to himself and kept trying to rip them all open as soon as everyone’s back was turned. We don’t have a high enough shelf to place four advent calendars (and it would be five of them next year) due to his non-human climbing skills, so I decided to buy this instead: 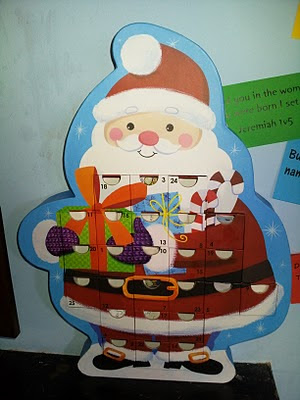 My first thought was to put four treats in each drawer and place it up high, but then I realised the drawers were actually too small for that, so that inspired an even better idea.
Every morning after they are dressed they get to open the drawer and read the note inside. It tells them what their Christmas activity for the day is – which ranges from the nativity play at school, to writing Christmas cards, to dancing to Christmas music (I like this particularly lazy one). But it also has a clue to where their treats are that day. If it’s Rocky’s turn to ‘read’ it, I just draw a picture of a shoe, for example, but for the others I do little rhymes like ‘Four little treats, where could they be? They’re hanging on the Christmas .........?’
I was feeling particularly smug the other day when instead of a rhyme, I simply put ‘Look under there.’
‘What?’ they were saying. ‘Look where?’
They started looking under chairs, under the cabinet and under the table. Finally Turtle stood up and said ‘Under WHERE?’
‘Underwear?’ I said, ‘Did you just say underwear?’
Their faces all lit up as they realised the answer to the clue but they gave me the last laugh, as they all in unison proceeded to look not in the drawers upstairs, but in the ones they were already wearing.