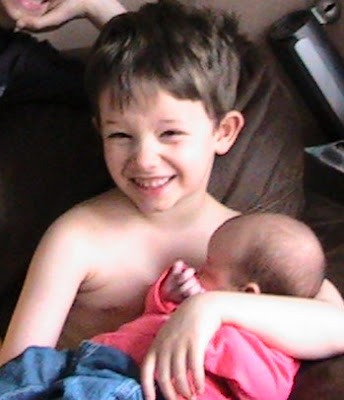 Year Two are currently focusing on writing stories, and more specifically – punctuation. Ace likes to put his own slant on things and his teaching assistant has been very amused that he decided to take her advice on spaces literally. He now uses the visual aid she gave him – a picture of a finger in between two words to show how big the space should be – as a model, and is carefully drawing a picture of his finger between each word he writes.


That’s what’s known as backfiring, and the main reason I don't homeschool.
Personally I am getting even more amusement from his special use of air quotes, as he keeps randomly adding them to his conversations.
Mummy, I love these “sausages.”
When are we “going” to go outside?
I don’t think he likes “that”, do you?
It’s funny anyway, but even more so because it reminds me of this scene from one of the funniest episodes of Friends ever (and I do know, because I have devoted years of research to it):
http://www.youtube.com/watch?v=bW8OkSJvhvE