This weekend is a new first. On Sunday, one of our twin boys will turn nine, while the other twin brother will forever remain an eight year old. It’s such a weird concept, I can’t even work out what to think about it. The nearly-nine-year-old in question thankfully doesn’t seem to be hampered by this troubling concept – he’s been planning his ninth birthday for months. It’s even weird for us to be actually planning out what we’re doing for one of the kids’ birthdays. We haven’t done that since Rocky was two and we spent the day at Legoland the day after a friends’ wedding in Luton. Since then every kid’s birthday has been dominated by hospital activities – several have actually been celebrated in hospital, which ended up being some of the best ones thanks to the generous nature of NHS staff who are willing to put up decorations, sneak in cakes and give presents – even when it’s the patient’s sibling’s birthday rather than the patient himself!

So we are going to use the house in Preston we stayed in over the summer on Saturday, as Ace wants a treasure hunt and a Nerf gun war, and other things that will work well there. He’s written a specific list of things he wants, some that he’s definitely not getting (pet lizard/pet frog/his own iPad, etc), and others that he’s stated that he HAS to get otherwise it will be the worst day ever. Hmm. 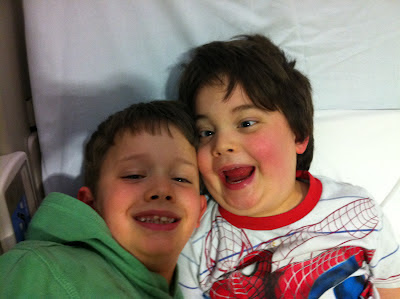 Last year’s birthday wasn’t so great. We managed our usual tradition of a McDonald’s breakfast, but after that Scooby struggled for the rest of the day with seizures. We should really have taken him into hospital, but he was on weekend release and desperate to stay at home. Plus our friend Steve (from the aforementioned wedding) was staying over with his family and Scooby didn’t want to miss them. Ace had an amazing day, as our attention was so taken with his brother, because we let him play computer games nearly all day, which is complete heaven for a newly-eight year old boy. He thought it was the best birthday ever! We managed to keep Scooby at home, though we had to medicate him and put him to bed very early. The next day was when we took the kids for a walk along the prom and Scooby had an absence seizure in his wheelchair and seemed to stop breathing. Richard had to perform mouth-to-mouth on the prom and eventually an ambulance came and took him back into hospital, where he stayed for several weeks. After that, we had very little time at home with him.

So their last birthday isn’t one I like thinking about, but I love remembering their birthday before that. Although their actual seventh birthday was spent in Manchester hospital, that weekend Scooby was out and so we took them all to the Lego Discovery Centre in Manchester. We bought them a few presents each, but also gave them some money to spend when they were there. They ended up with a few more gifts of money from family members, and suddenly these two seven year olds had fifty pounds each. We don’t give them actual pocket money at home (we use a points system where they save up for what they want and then I usually order it online) so to have that amount of money at their disposal, which they’d never seen before, was hilarious. We watched with interest to see what they would do.

As soon as we were out of the play area and the gift shop, Ace immediately identified which Lego sets he wanted and asked us how much they each were. This kid, who pretends to hate maths at school but is secretly really good at it, turned into a human calculator as he rearranged boxes in front of him, putting them together in groups, weighing up which ones he would have to reject in order to get the most from his money. Within ten minutes, his decision was made and three sets had been purchased.

Scooby, on the other hand, agonised over what to spend his money on. He looked at nearly every Lego box in the shop, settling only on an activity book. He was so relieved when we told him there were other shops in the Trafford Centre and he didn’t have to buy Lego! We hadn’t realised how much he only played with it to join in with the others until then. The book was bought, leaving him £47.50, and then we went round umpteen toy shops in the rest of the centre. He picked things up and put them down, and said maybe he would save his money and spend it another day, but we reminded him that we very rarely took them to the shops (four boys, a baby and shops don’t mix well at all) so we should look a bit longer. Then I thought of my favourite shop – WHSmith. We went in there and Scooby’s eyes lit up. He went up and down the bookshelves and stationary aisles, pouring over every offer.

“Ooo, one pound for crayons!” he said.

He sniffed out every bargain he could find – a Where’s Wally? collection that was cheaper than buying them separately, DVDs that were half price, and – his favourite find – a board game that was half price just because it had been opened and the pencil was missing. We had to convince him to buy another board game that he really wanted but wasn’t on offer, reminding him he was allowed to buy things at full price too! When he finally left the shop,with his carrier bags stashed full, Richard and I were howling with laughter at the difference between our twin boys.

Not only had they never been taught how to shop or spread their money so well, but we were blown away by their similarities to us. Ace shopped exactly like Richard did, with no hesitation, getting exactly what he wanted immediately, with no desire to change it even after seeing everything else in the shops; Scooby did exactly what I always did, agonising over every decision, wondering how to make the money go as far as it possibly could and almost refusing to buy things at full price.

It's one of my favourite days with them ever, and one of the many ways that kids constantly help us to understand our character, by reflecting it back to us.

Hoping that this weekend will produce more happy memories and character building for all of us!