The good news is this: it looks like Scooby is on target for a bone marrow transplant in the next few weeks. His blood levels are doing what they are supposed to be doing; the chemo seems to have destroyed any evidence of HLH in his system; his temperature has been normal and any infections are being quickly recognised and dealt with; he is less sleepy and a little more ‘with it’ than he has been for the last few weeks; and so far the tests for Rocky have been clear to show that he qualifies as a suitable donor. The doctors had to keep the steroids raised higher than they wanted to in order to get the levels right, and his various drips and infusions are being constantly tweaked to make sure he’s getting what he needs. His appetite has been almost normal this week and his weight is now not much under what it was when he first went in, which is pretty surprising.

And one really REALLY weird thing has happened – his double vision has gone. Since mid-January 2010 he’s seen two of everything, and the angle has shifted when the disease in his brain has got worse, but he’s never had a day without it, until last week. It’s actually quite freaky to see him looking at us face on because we’d grown so used to one eye pointing off in another direction. We have no idea why this has happened – it’s possible that the steroids have caused some inflammation to go down, or caused something else to move over (his face on the outside seems to be getting bigger every day and around his eyes it's very puffy, so there could be something similar going on in the inside) so it could just be a temporary thing, but as Richard said, in the beginning it was the only thing that seemed to be wrong (and we wouldn’t have taken him to hospital if it wasn’t for that), and now it’s the one thing that seems to have gone right! 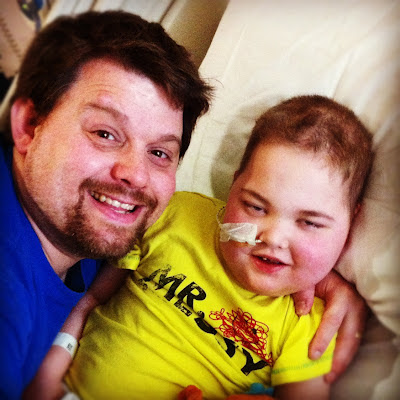 So, while we are pleased that the doctors are happy that his body is finally following The Plan, we are also slightly dazed by realising all that a bone marrow transplant entails. The transplant itself is a ridiculously easy procedure (once you have a donor, which has been a breeze for us thanks to our over-zealous baby making, but often involves a worldwide quest for other recipients), because it is simply sucking some cells from the donor, putting them into a bag, and then dripping them through his central line for a couple of hours, like the half dozen blood transfusions he’s had already. The complexity of what his body has to go through, however is pretty mind-blowing, life-changing and scary stuff. Before the transplant, he will have chemo that destroys all his own bone marrow within a few days. So there will be no immune system and no ability to create any kind of blood cells at all. When Rocky’s stem cells are put into his body, they have to find the right places to go, settle into those places, and then start to do the jobs they are supposed to do, while multiplying themselves enough times until his body has enough bone marrow to be able to reproduce blood cells and immunity for his whole system. This will take about six months in all, and so in that time he will be restricted in what he can eat and where he can go, and will still need pretty heavy medications, including more blood transfusions and anti-rejection drugs. His central line will stay in for a long time so they can give him those, and coming home depends on a massive range of factors. In fact, when patients come home, the hospital keeps their bed assigned to them for a while afterwards, because chances of complications are high and an infection or an alteration in blood levels can mean they are back in for days or weeks until it is sorted.

The minimum stay after a BMT is six weeks, and we’re pretty sure that as Scooby has NEVER been a straightforward case and has needed so many factors to keep him stable this year (even on this ward, the nurses are surprised at how many medications he is on!) that he will be in for longer than that. So as well as the implications of how tricky it’s going to be to get his new immunity and blood-making systems to work effectively without succumbing to any dangers on the way, we’re also dealing with the logistics of knowing that we will be physically divided as a family for a long time still yet. When a transplant was a hazy mirage in the distance I was girding myself to be ready until perhaps the end of March (I don’t know why – that’s about as far into the future as I could think at that point). Now that we can see what it looks like, we are peering into April and May, which includes my cousin’s wedding, the birth of our new nephew, and my sister and brother-in-law leaving to travel and do missions for a year, and knowing that even if he’s out before the summer, we will still be under the no-germs, restricted food, restricted visitors, etc, etc, regime until the autumn.

So we have been slowly processing this over the last week and coming to terms with the idea. The idea of most of this year being absorbed with Scooby’s treatment. And of course, the idea that by the end of the year, we may possibly have said goodbye to this horrible disease that has been doing its best to slowly steal him. I can hardly dare to imagine it, but IF the treatment has got rid of his mystery two-year illness as well as the HLH and IF the post-transplant obstacles are overcome, then we get to keep him. What permanent damage has already been caused by the disease and the intensive medication, we don’t yet know, but four weeks ago I didn’t think he was ever going to come home again, so at this stage I don’t even care about that. We have hope – not just a tiny glimpse of it, but a big dollop of it that comes with a name and a shiny booklet and a six month plan. Hooray for hope.