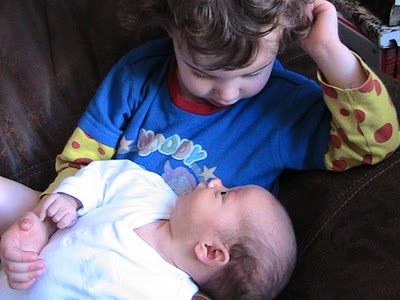 I cannot imagine life without brothers and sisters. I know many people don’t have that luxury due to circumstances beyond their control, and I am so glad I am not one of them. I grew up in a family of four children, and was determined to have four children myself. But then I got greedy and added an extra.
I don’t know why I was so determined to have four. If you’d have seen me as a twelve year old, claiming that my brothers were the worst creatures on earth and that I couldn’t stand being around them, you’d have wondered why I was thinking of inflicting the same punishment on my own children in the future. Fighting over who controlled the remote, yelling at them for stepping into my private sanctuary  bedroom, kicking each other under the table for making irritating noises at meal times and trying to spread the blame for any trouble we found ourselves in – we must have driven our parents crazy. There were times of real genuine loathing in our teenage years where our prime aim in life seemed to be to either gain supremacy over each other (through verbal arguments or worse) or just make sure we avoided each other like the plague. I honestly started a weekly countdown in my head in the year before my older brother left to go to university.
Despite all the aggravation though, there was something about the security of having those people alongside me in life, sharing experiences and learning to navigate  a path with them already on it. Between the conflicts, there were (sometimes few and far between) moments of comradeship and understanding that made it all worth it. I can’t say I ever remember my older brother specifically rescuing me at any point during our school years, but just having someone always in the year ahead of me meant that I never had any fear of what was coming up, even though I was really really shy when I was little. I think I just assumed if he was already there, then it would be okay, and if there was anything to warn me about, he would let me know first. (In fact, I do remember a late night talk now just before I started high school where I was filled in with some general lingo and innuendo that meant I wouldn’t be exposed to any ridicule by not knowing it. I don’t know what cost you bought all that information at, but you saved me the same grief by passing it all on for free. Thanks bruv.)
I can’t imagine who I would be now without those experiences. I think I may well have grown up with an unrealistic view of who I am. There’s nothing like siblings to bring out the worst in you and make you face those secret, unpleasant places that can so easily be hidden to the rest of the world. Without that, how would you grow as a person and understand your need for forgiveness and redemption?
As we have grown into adulthood, our relationships have changed hugely. We are now really close friends and allies. We have challenged each other, helped each other and even lived with each other temporarily without any fighting between us!
And there have been several times when I honestly think we have saved each others’ futures. There are at least two occasions in the last few years where one of us was teetering on the brink of making choices that would have caused irreparable damage, and at the point of crisis, it was siblings who were there in the right place at the right time to tip the scales back. God used that unique brother-sister relationship of equality, common history and knowing each other inside out which meant we could hear and grasp the heartbreaking agony of making those decisions but still speak the truth that needed to be said.
Of course there have been other times when we have interfered and got it really wrong, but we’re allowed to do that with each other too!
I hope and pray I can foster some of the same relationships in my own children and see that irreplaceable bond between them in their adult lives too. I hope it will make my own times of watching the sibling rivalry more bearable. I may need to remind myself of the necessity of it a few more times before I’m done.
We have walked together, cried together and celebrated together and I think we will continue to do so for many years to come.