We've just returned from a five day holiday at Disneyland Paris (yes, I wrote this two month ago. It's taken me this long to finally add the photos to it, due to a phobia of inserting and accurately aligning more than one picture into blogspot at a time. It's hard work and has taken me several goes. Do you hear me blogspot website managers? HARD WORK). (And don't get me started on the highlight of the text that can't be removed - it makes me want to cry. I only have OCD in one area of life and that's in published material. This is killing me.)

It was incredible. The time of year meant that it was pretty quiet (although pretty quiet at Disney is like peak season for most UK attractions) and so instead of spending half the days in queues, we were able to go from ride to show to meet'n'greet, etc, with only a five minute wait most of the time while we waited for the group in front of us to finish. I think we only queued for more than ten minutes about six times the whole time we were there. It was cold (though not as cold as it should have been) and it rained quite a bit but it was worth putting up with just to be there.

We took oodles of photos, of course, so here are just a few to show what kind of memories we made: 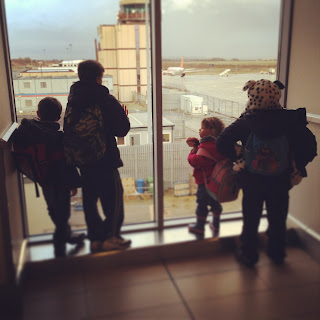 Waiting to get on a plane. Although the older three boys have been on a plane before, they were too young to remember it, so this was a first experience for all of them really. 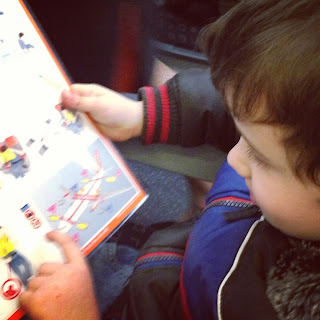 Rocky decided the emergency evacuation procedure looked like some kind of fun park in itself with all the slides and inflatable trampolines. He was disappointed when I told him we hopefully weren't going to be going on it. 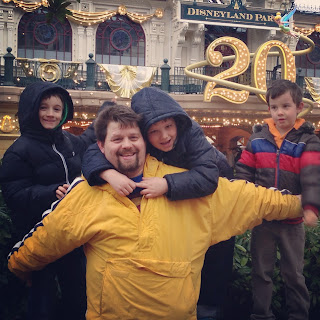 The reason we got such a great deal: the twentieth anniversary celebrations. 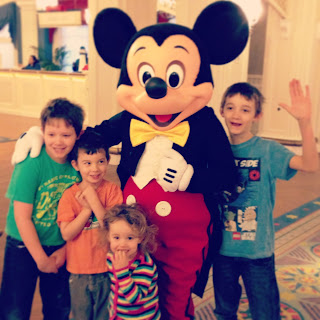 The main guy himself, waiting for us when we came down for breakfast. We made him queue to meet us ;) 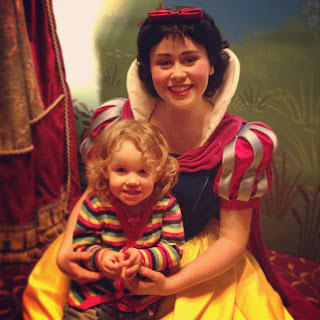 The only thing we actually had to  wait in a queue for was to meet the Disney Princesses. Baby totally bowled all of them over, chatting to them as if they were her best friends. 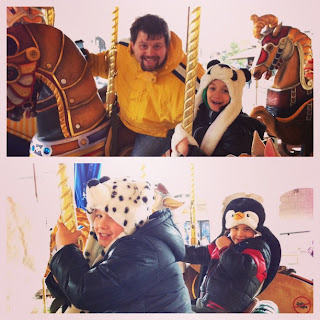 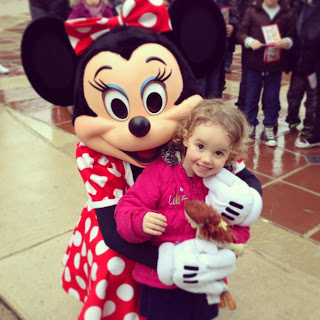 She was desperate to see Minnie Mouse, so when we spotted her on the third day, we released Baby from her pushchair, and she flew through the crowd around Minnie and threw herself on her. I pulled her away and apologised, but instead Minnie waved the rest of the respectfully waiting crowd away, and brought Baby back instead for some fierce cuddles. Love how you can get away with anything when you're two. 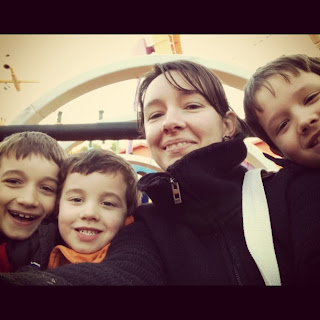 Me and my boys on the Slinky Dog ride (you sit inside Slinky's spring). 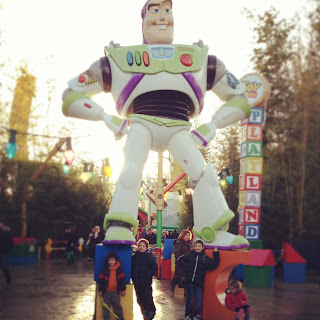 The biggest Buzz Lightyear you're ever gonna see. 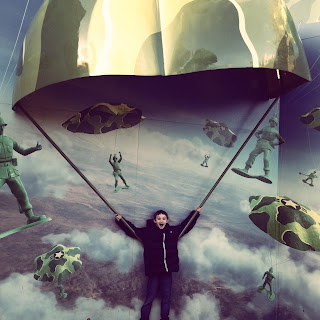 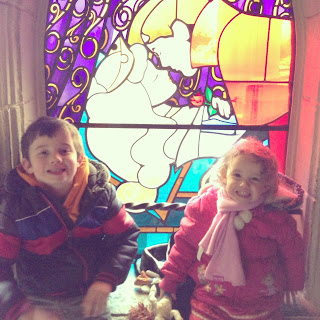 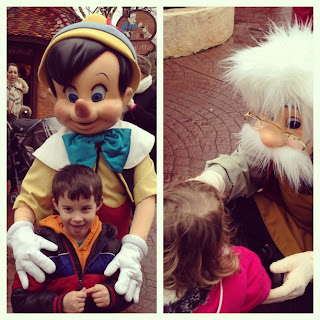 Rocky meeting one of his favourite book characters. 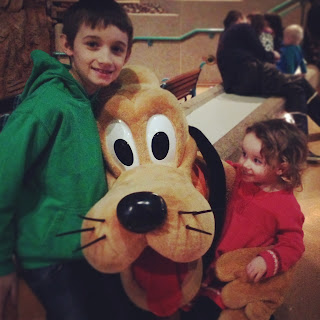 Just before filing missing child reports, we found them with Pluto. Apparently anybody wearing a Disney character costume is as safe as (but more interesting than) your parents, so if you see them, you're allowed to abandon your family in pursuit of them. It took a while for them to understand this is not true. 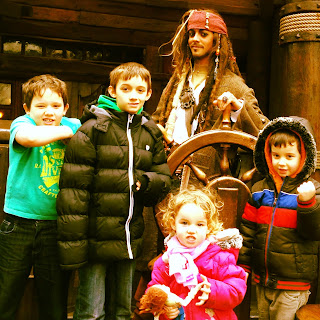 Jack Sparrow was brilliant. The benefit of off-season is lots of time at the Meet'n'Greets. He wouldn't let them go till they perfected their "aaargh"s. 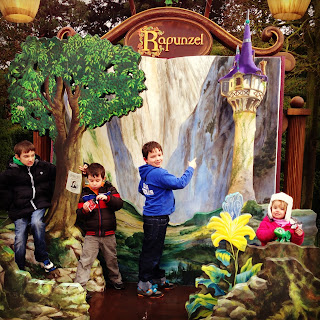 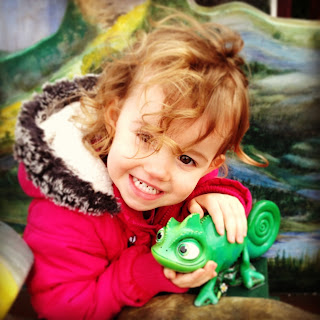 Don't even know how to caption this. It's just too cute.

It wasn't our first trip to Disneyland.  Five years ago, for its fifteenth anniversary, it had a kids-go-free offer, and we got an unexpected chunk of money, so we decided to go. Turtle was six, Scooby and Ace were four, and Rocky was just six months. It was a busier time, so keeping them all occupied in the queues was really hard, but it was fantastic, and of course our experience stuck with us for a long time afterwards. We always hoped we could take them again in the future, but doubted we could afford it, and then with Scooby's illness, we couldn't plan holidays anyway.

When it was clear that Scooby's illness was a long-term thing, a nurse from our local hospital recommended we should apply for the Make-a-Wish Foundation, so we did. We put Disneyland at the top of the list, as Scooby chattered about it quite a lot, and we knew they often made special arrangements for the medical side of things, which was our only chance of getting insurance to travel abroad. Of course we didn't tell him about the application, but the more ill he got, the more the whole idea of Disney-related stuff seemed to help him through things. When he couldn't do anything other than listen to stories or watch movies, we got through loads of Disney books and DVDs, particularly the Pixar Shorts which he found hilarious. He frequently asked for MRIs because in the scanner, to help sooth the noise of the machine, he could listen to Disney soundtracks. Once we understood why he kept asking for brain scans (!), we downloaded Disney music tracks for him to listen to in his hospital room. And the last few times he was able to interact with his siblings, he would ask them to get on his bed and they would all pretend to be at Disneyland - to be going on a boat on the way there, and then on the different rides.

I was gutted when we got a call from the Foundation to tell us that they were going to grant his wish and I had to tell them that he'd died two weeks earlier.

So when his Child Trust Fund was released to us a few weeks later, we decided that given the choice on what we spent his money on, he'd have wanted us to go to Disneyland. As it was now the 20th anniversary, there were more special offers on, but although we could now afford a large chunk of it, we would need around a thousand pounds to afford the rest. We put the decision on hold while we decided whether we thought we could save the rest somehow.

A few days later we received a letter in the post from a friend of my brother, who we had never met, but he had been following our story and praying for us along the way. He was one of the trustees of a charity that his grandfather had bequeathed, which would help families with sick children. He'd brought our situation to the other trustees and they had decided to grant us some money to spend specifically on treating us as a family to something special. The amount was one thousand pounds.

We were overwhelmed with the generosity of strangers, and the specific provision for something we didn't need but had wanted. It was incredible, and one of the many ways in which God kept revealing His hand to us in the difficult first few months. We booked the holiday, and then had the added excitement of waiting to tell the kids. On Christmas Day, we had wrapped up some of their Disney toys attached to letters, so they were confused to open a huge exciting-looking box only to find their existing toys inside, until they rearranged them to work out what they said! 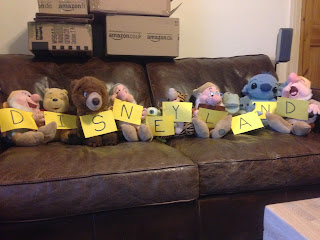 Thanks to even more generosity of family, and waiting till the last minute for a great deal, we changed at the last minute from driving to flying. Although Turtle and Ace had flown a long time ago, they were too young to remember, so it was a first for all of them to fully experience going on an aeroplane. In Rocky's words: "It made me feel all tickley inside - I think my tummy likes flying!"

I thought beforehand that it was going to be tough to be there without Scooby, and that we might spend some of the time really upset that he wasn't there. But it felt really different for a start. Turtle and Ace were five years older, so they saw and experienced things really differently to how they had last time. And five years ago, we only had three children who could join in and enjoy the experience - this time there was four sets of reactions to watch instead. Plus we'd skipped quite a few things last time because they were "girly" so this week we found all sorts of new attractions that we hadn't seen before, and the boys definitely enjoyed them more than they thought. (We didn't make them queue up to meet three different princesses though - they ended up going on the Star Wars simulator three times instead!)

A couple of times I got a hit of emotion - once as the parade came round the corner for the first time, and also when we were buying their toys on the last day ready to leave, because they were two of the things I remembered so clearly from five years ago, that it was like having flashbacks.

But apart from that (and the plane ride home when it all hit me again), we didn't spend most of our time mourning for him. Of course I thought of him loads, and of course I wished he was there, but it was me being able to experience his reactions that I missed. I don't feel at all like he was missing out on what we were getting to do, partly because I know he DID get to go five years ago, but mainly because I know that what he's experiencing right now far outweighs any trip to Disneyland or any other pinnacle of childhood.  It's not for his sake that I feel any sorrow, but for mine. I feel so impatient to be where he is, and so relieved for his sake that he's not limited anymore (I can't imagine what stage of his illness we'd have been able to take him at if things had worked out differently, but I'm sure there's loads of stuff he wouldn't have been able to do). I'm so glad we were able to treat the other four children to something special on his behalf, and for the way things seemed to come together so well to make it all happen. We've been incredibly blessed, and we are incredibly grateful.
Labels: Beyond Scooby Holidays