Just a quick update – Scooby and I went down to Manchester last week for a few days. Since his time at Great Ormond Street, both teams of doctors have put their expertise together and been able to rule out many possibilities, narrowing it back down to what they thought in the first place – an immune system dysfunction. They think they can identify white blood cells in the biopsy from the brain, which would point towards this too. They are still unable to diagnose what it is or what has caused it, as he is lacking many of the markers that normally come with immunity problems, but they don’t want to keep him on the steroids any longer and they feel they finally have enough to go on, at least to make another step anyway.
So he is now having treatment that directly affects his immune system. Last week he was put on an infusion of methylprednisolone which is like a mega steroid dose, to wipe out those cells entirely. He is on a new daily drug (azathioprine) which will keep his immune system suppressed and he is likely to stay on this for a year or more. As we had been told to expect that the next step would be trying him on a chemotherapy drug, we are so grateful that they have found something much less toxic that may do the same job with many less side effects!
As with everything, this is an experiment, but we hope that it will prove to be the answer for both our situation and any other family that may go through something similar in the future. As much as I love the steroids for keeping my boy functioning and well, I can’t wait to get to the stage where he is no longer fuelled by them and will be able to cope with life a little better again. 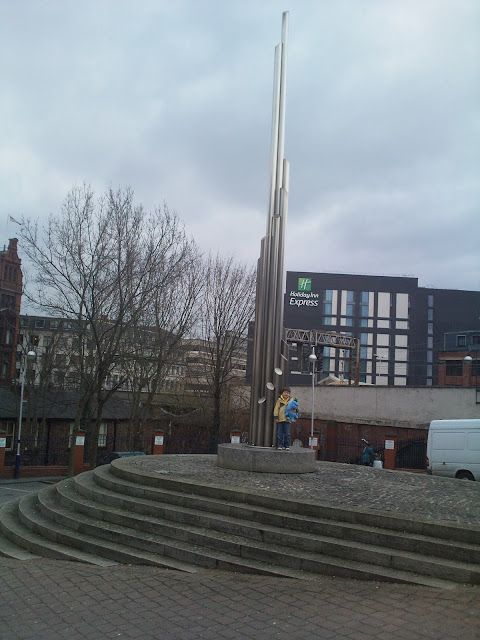 I am coerced into taking pictures of Scooby (and Mr Grumpy) at any kind of monument or sculpture that he sees. This one is outside the train station in Manchester. He wants another new picture of himself every time we walk past it.
Labels: Scooby Syndrome