Hello and welcome to my new blog home. What do you think?   :)
It’s a little less shabby than the old one, if I do say so myself, and I much prefer the community on this one. It seems to have a lot more frankly normal people on it (if you get a spare half hour to flit around the other one it won’t take long to see what I mean).
The thing that really helped me make the decision was the completely inappropriate advertising that was being shown on the old one. I mean, late night phone dating services? Could they not tell by putting a little effort into reading the blog that the only late night conversations that I usually have are the ones that begin with ‘Who just came in here and put their cold feet on my ankles?’ and end with ‘I don’t care what you think is lurking in your room, I am much scarier than any monster you’ll find in this house, so GO TO SLEEP!’
I do feel sorry for the posts now abandoned on the other site but I thought rather than repost them all maybe I could cheat reminisce occasionally and put some of the best ones up here when I’m out of other ideas feeling nostalgic.
Hope you had a good bonfire night. Ours was pretty lame - probably for the first time ever, we didn’t have any specific place to go, so we thought we’d go out onto the prom late in the evening, eat fish and chips, and watch any displays around the bay. We must have picked the wrong time or the wrong place because we hardly saw any. We got frozen to the core though, which is kind of traditional for bonfire night, so at least we felt part of it.
What we did do a lot of this week was retelling the story of Guy Fawkes, using Turtle’s massive history book that we all love, and lots of pictures. We have lots of WANTED signs around the house with Guy Fawkes’ picture on (offering a reward of £725389.00, which I suspect may have been quite a lot of money in the olden days). And in the top bathroom, with a warning sign on the door, we actually have a picture on a piece of paper actual real gunpowder, so watch out folks!
Here is Scooby’s new home school corner: 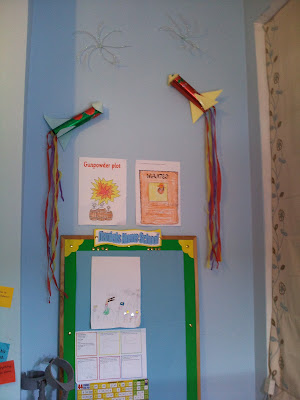 And here is something I’m really really proud of (no, not the state of the bathroom):
(photo removed now he's old enough to read - as promised!)
A child who after TEN DAYS is fully potty trained - in fact, he’s decided to skip the potty part now and go straight for the real thing. If you know how long we struggled with the others, you will know that this is nothing short of an actual miracle for us. He still managed to get in a few good tales to tell for when he’s older, involving a table full of Meccano and a giant box of Lego, but he obviously decided to forsake that game in favour of Buzz Lightyear stickers. We have a winner!
P.S. – Don’t worry, I’m not going to keep that picture up forever, I’ll take it down before he’s old enough to read this!