D is for Darkness

Last year we moved house in December. It was a pretty cold and snowy December, which made it awesome for the first morning when we woke up to snow in our garden for the first time ever. But for me that exciting moment was short-lived as the rest of the month, then the next month, and the next one, AND the one after that was full of more cold, ice and snow.

I’m not great with low temperatures anyway (I feel like it gets into all my muscles and makes me ache) but the other thing that really got to me was the darkness. I loved our new house but it felt for those first few months like we were in darkness for most of the time. The older boys were leaving for their train while it was still pitch black outside and arriving back as the sun went down again. I was struggling so much with fatigue that many daylight hours were spent asleep so I missed lots of light.

It was more than that though, it was a frame of mind. I had pinned a lot of hopes onto the move and I knew the whole process of undoing our old life and starting a new one would be tough. I couldn’t have imagined though that because of other events that were thrown into the mix in the months before we left, my mental health would spiral downwards so much. I really wanted it to feel like an exciting fresh start and I was so disappointed that so much of the grief and confusion of the last chapter couldn’t just have been bagged up and thrown away like the other possessions we chose not to bring with us. It felt like it had taken root deep inside of me and I wondered if there was anything I could do to change it.

There were times in the middle of the night, and first thing in the morning as the alarm went off, that my mind would begin to sink downwards like it was hurtling towards a vortex of nothingness. It kept happening before I even had chance to work out what I was thinking. It was just a dark negative picture of who I was and how my life would always be and it felt like falling without ending into a big hole of nothingness. As that happened, every single negative thought I had about my past, present and future would rush into my head all at once. The friendship that had broken up years ago, the paperwork I was behind with, the ideas for the future that would now never come to pass. These things felt like massive, overwhelming giants that I alone had to face and something was telling me I’d invited them all in by not being enough in the first place. This carried on for weeks and it felt crippling. During the day I would do all I could to escape these thoughts by hiding in books or boxsets or documentaries. But as soon as it was dark they would come back again.

Several months into this, I had a stupidly simple tiny revelation. I’d woken up panicking about something I hadn’t done but later that day had found the time to sit and work through. I can’t even remember what it was but it had weighed on me for ages and suddenly one afternoon it was completed and I realised it hadn’t been a big deal at all. This little voice inside me said, “You shouldn’t give yourself permission to think about this stuff when it’s dark outside.”

I began to notice that all my downward spiralling happened when it was dark. My thoughts felt big and uncontrollable in the middle of the night when I was drifting in and out of sleep and could do nothing to change them. But in the light of day, nothing seemed as big or ominous. When I stopped buffering all my feelings with escapism and gave myself small pockets of the day to sit and think deeply about whatever was weighing on me, it looked completely different. I used different words to describe it and could usually find a way to solve whatever the issue was.

As soon as I felt those feelings in the dark, and my mind began to panic about something, I would make myself a promise and say, “You’re right, that needs dealing with. I’ll make some time tomorrow.” Trying to tell my frantic emotions not to worry about it at all wouldn’t have worked. But reassuring them that I would let myself think about it properly tomorrow, but only when it was light outside, gave my broken survival instinct a different pocket to fill. I saved my emotional buffering for the darkness (audiobooks were my favourite off-switch for my brain) then tried to use less of those crutches during the day.

It was a slow gradual process but I have seen massive improvements. Those feelings of spiralling into darkness happen very infrequently now and when they do, I am able to hit pause faster. A few hours later, I can usually pinpoint where that feeling came from and look at it with fresh perspective. A bad moment can now be a bad moment instead of a permanent prophecy about my future. Doing this in the light minimises the problem and keeps it in proportion.

I have been studying the gospel of John all year (that says a lot about how many other things I’ve been using to distract myself in the meantime!) and right from the very beginning, the book is talking  about light. People were walking in darkness, not seeing things properly, and into the world came light. Even though many people didn’t recognise it, Jesus is the light. He came to reveal things to people that they didn’t know. He came to show us the truth about how things really are - not what we have been told, or how we feel, or even what our experience has taught us, but what the real actual truth is.

When you have experienced the full weight of darkness and you begin to see light again, you want to chase after that with everything you have. No amount of weariness can stop you. I cannot find words to describe what these last few months have been like as I’ve seen the same areas of my life which I had written off become illuminated with new colours. It’s not something I could have done myself. It has only come from walking in the light.

D is for definition: the true understanding of what something actually is. No guesswork or presumption, trying to fill in unknown gaps with wrong conclusions. It’s getting closer to something and seeing every aspect of it, gaining a deeper understanding and interpreting it correctly. The more I fill my mind with real truth, the more my feelings follow. 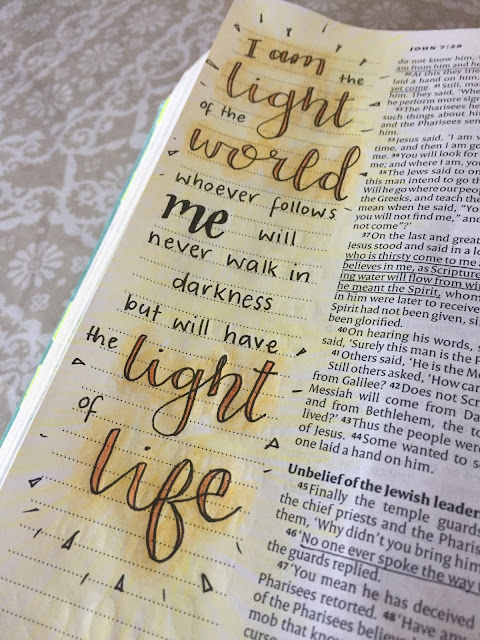 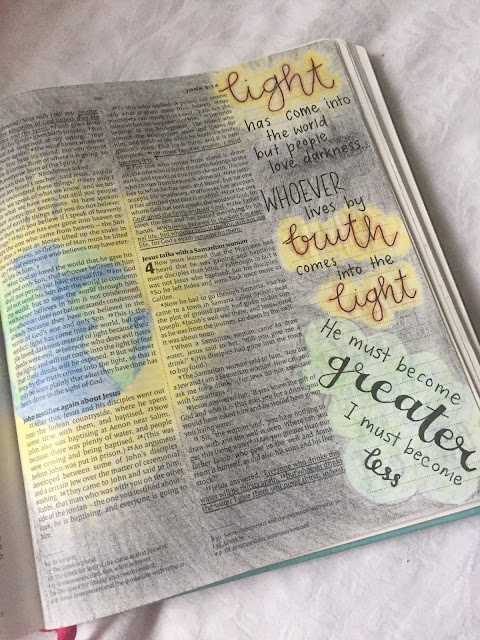