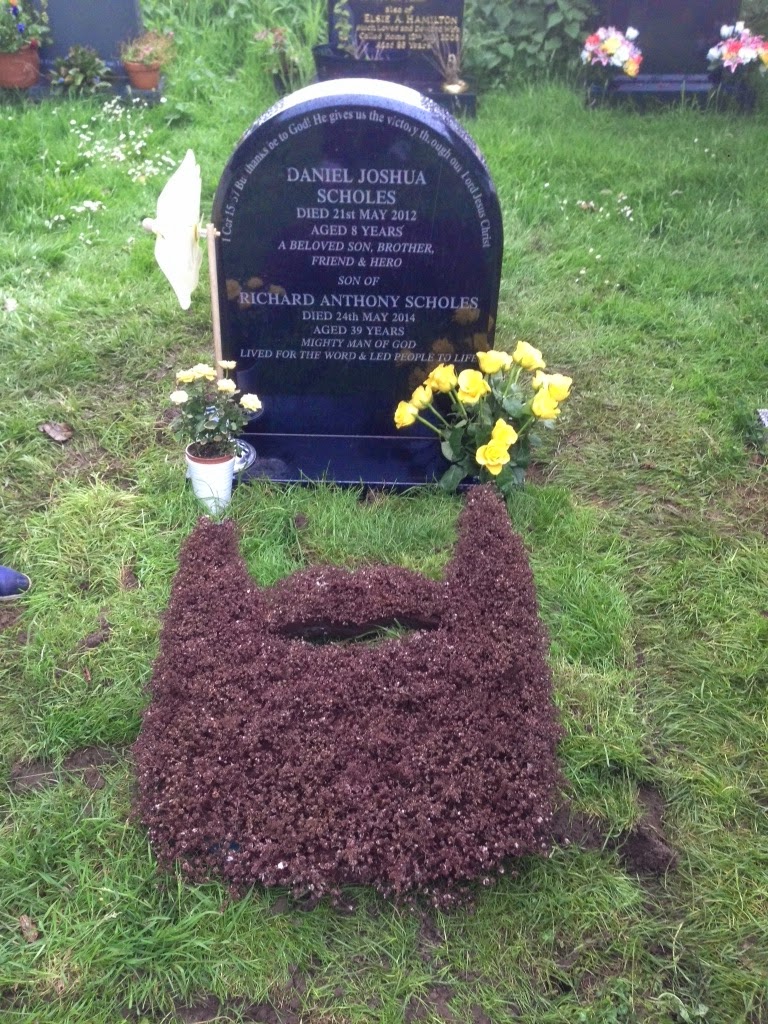 I think the general expectations of funerals are that they are sad and difficult obstacles that are necessary to hurdle over in the first few weeks of grief, but I love that real church life is counter-cultural to the rest of the world. Today has been a day of huge highs, as we got to gather and exchange our stories and gratitude for a man who has had a big impact on our lives.

This morning Richard's body was laid to rest - and oh, what a mercy that phrase is after seeing up close what it went through. No more pain or distortion or brokenness for him anymore. Although the processional side of funerals is so foreign to me, the dignity and respect shown to him in this last act was a real blessing, as loss of dignity was such a factor for him in the last three months of his life. The funeral directors went above and beyond as my mention of his love of Duck Dynasty resulted in a coffin branded with the logo and the official DD duck camo that he loved. A florist friend had also taken my off-the-wall suggestion of a beard of flowers and actually made it happen, and it was a beard to be proud of (for a man who, when he lost his actual beard to chemo, kept it under a glass jar for weeks afterwards and threatened to market it as a relic which could be sold off strand by strand).

Then we got to the best part - gathering together at the church we met in, and celebrating his life by singing our hearts out in worship to God. The band was made up of family and friends who were close to Richard, and led by a man who has pastored us for years (which makes me so aware that many people have their funerals led by strangers, and how privileged we are). Richard's sister gave an amazingly funny, sincere and inspiring tribute to her brother, and the guys from our church got to stand up and talk about the vision God had given Richard for the church. Our family were prayed for by everybody there, and my kids got to experience over five hundred people showing their love and support to our family.

I am so glad for all those who came over to say hello and give me a hug and words of encouragement and condolence. Looking over the cards and messages tonight I've realised there were far more people there than I got to make eye contact with, and so many made really long journeys in one day just to be there. I'm so sorry if I didn't get to see you.

I was surrounded by a group that have started to refer to themselves as my armour bearers, and they stayed by my side the whole time, bringing me tea and food and tracking down the kids and looking after things people handed to me. They even came up with a little technique every now and then of falling into a line around me when I needed to take a breather from talking, or to eat a sandwich. It meant I didn't have to do any of this alone and I didn't feel at any moment like I was under pressure to talk to people - I did it because I really wanted to see as many people as possible and they gave me what I needed to be able to do that.

(This group was formed several months ago when Richard was first officially diagnosed with myeloma - God had brought to mind twelve women who have had a huge impact on my life in the last few years and have carried me and strengthened me through my darkest days. I'm rubbish at asking for help, but the whole time we were waiting for that diagnosis, I knew I couldn't face another monumental challenge like this without some kind of supernatural extreme friendships, and so I invited them all to be part of an email group that took turns to send me encouragement every day, and who I could be really open about my feelings with, and they all said yes :) Even though they didn't all know each other, they have formed amazing bonds over that time and today was the first time all of us have been together in the same place. That in itself was a huge blessing for me.)

Tonight I read through the many cards that were sent to us, and through the memory books that people filled with their stories and tributes of Richard. These are incredible and will be so significant for our children as they read them growing up and get to see their dad through the eyes of many different people. If you weren't there today, or have remembered other things you would like to contribute to the memory books, please send me a message and I would love it to add it to the collection.

I really do want to say thank you for today, and for beyond that too - I know it's not practical for everyone to make the journey, but you've still reached and connected with your words online or through the post, and it really has had a huge impact one me. Thankyou thankyou thankyou.

Finally, inside the order of service sheets was part of Richard's story and I wanted to share it here too so that everyone could read it. I hope it is helpful for all those struggling with what has happened to our family:

There is so much that seems unfair about Richard dying at the age of just 39. It looked like he was in the middle of the most productive years of his life - his family are young, many of his projects and ideas are taking shape, and the church he planted is growing in depth and impact as a result of his leadership and vision. Despite the medical and physical deterioration we could all see, none of us actually expected that he would leave us so soon.

But in truth, if there was a time in his life that was more fitting for him to die, it would actually have been about the age of 22. Because it would have satisfied our notion of fairness much more. At 22, Richard was a man who had been given everything he needed to build a good life, to help other people and to make a positive difference in the world. That’s not what he was doing though. For years he'd been using his time and resources to take advantage of people around him, to live for himself and to betray people’s trust. His story was the epitome of the prodigal son - he took all he had and squandered it and was on the way to destroying his own life and the lives of everyone around him.

Thankfully, we don’t always get what we deserve. Just a year later, when all his friends, money and chances had run out, Richard finally turned his life over to God. He came to the end of himself and he reached out for God’s mercy and found it, and so much besides. If ever there was someone who knew he was not “good enough”, it was Richard. Not just because of those years he’d spent off the rails, but because of his constant struggles afterwards where he tried and failed to perfect himself. When it came to serving others, he was always trying to make up for lost time, and projects and successes could never come fast enough for him. He lived life at 100mph and encouraged everyone around him to do the same. He packed more into those fifteen and a half years of truly living than most people would, and we are left with an incredible legacy to build on.

But Richard’s story is not just one of bad boy turned good. No matter how much he did, he didn’t earn his way back to God and ultimately into heaven where he is now. All he did was understand the grace of God. He struggled every day of his life with wanting to be in control and other selfish desires, like we all do. His story is no different from the rest of ours - not one of us can be good enough to earn the perfect existence we really want. We all need a Saviour who can do that for us. Richard chose to let go of the control of his life, and found a much better life on this earth was waiting for him - a life of purpose and excitement, where his desires and gifts were fulfilled and he found true friendship and family. Not only that, but beyond this life he now is part of a better one where there is no more struggling or striving or illness, and everything finally makes perfect sense.

He wanted as many people as possible to hear about God and His life-changing power and so that is what today is about - celebrating the life that Richard was given, physically and spiritually. So through our tears and the pain of the gap he leaves, we can choose joy because of God’s incredible grace, forgiveness and plan for Richard’s life, and for ours too.
Labels: Heaven Richard