A few weeks ago the kids planted some sunflower seeds in little pots. We watered them and waited, and then in various degrees of speed, they begun sprouting. As they did, several of them had little caps on like this; 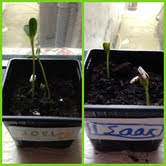 As I peeled them off to let the leaves open and grow, I was surprised how complete the seeds still looked. My first thought when I saw them was that a sprout had grown through another seed that was waiting to grow, but I realised that would be a heck of a coincidence to happen over and over again. Obviously, it was just the remainder of the seed's shell.

It hit me really hard how tiny the part that holds the component for making the plant grow actually is. Before it grows, the shell is hugely important. It's where the life pod - the bit that will become a plant - is birthed and protected. It's also what identifies it. I suspect that that the insides of different types of seeds probably look very similar to each other, so we need the shell to show us that its a sunflower seed, and not a daffodil bulb or an apple seed.

But the shell is not where the life is. It holds it ready, then when its time for it to be released and grown, it breaks open and isn't needed anymore. It dies, breaking down into cells that turn into earth to give life to more broken seeds later on.

And yet we spend so much time on these outer shells. On what they look like, what they should be dressed in, how to beautify them. Trying to make them feel better when they crave something more, so we give in to appetites and indulgences. We worry about how to sustain them financially and keep up with the expectations of everyone else around them. We cling to them desperately, afraid of what might happen if we allow them to crack and be damaged.

But they are not true life. They are only the precursor to life. And when they are finished with, that's when the true life begins. Something totally completely beyond comprehension happens, and these little brown and white round things give way to tall, bright green things. It makes no sense, but that's what it does. We've all seen it happen.

So what happens beyond death, I have no idea what that looks like. All I can imagine is something that looks like an improved version  of the world I see now, but I'm totally sure it's far more than that. As different from this world as little brown seeds are from tall, strong sunflowers. A million times better than anything we can comprehend. 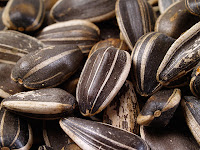 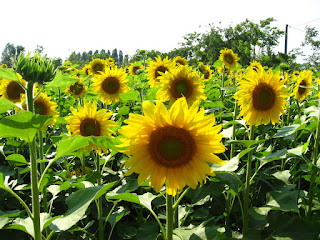 If we are planted in the right place, we will flourish, and become all that we were meant to be.