It is done – the bone marrow in one of our boys has been completely destroyed, and replaced with bone marrow from his brother. I don’t really get it – it’s too mahoosive for my non-medically-trained brain to deal with, but that’s what we have been told has happened.

It was all very straightforward and understated, as we expected. Rocky arrived on Thursday, and for him the biggest trauma was having a cannula inserted into his hand, but once it in, it was all forgotten about. His bloods were taken and he was weighed, measured and checked over for his basic stats. The nurses had done a little bit of undercover manoeuvring to ensure that the room next to Scooby’s was kept free (as there are only seven beds on the BMT ward and patients fill them for at least two months at a time, this was quite an accomplishment!) and this made a huge difference to Scooby, as he is so homesick and desperate for any time with family members as possible. Instead of Rocky having to stay in his own room for meals and observations, he spent most of his time with Scooby, and Scooby soaked up every minute of it. 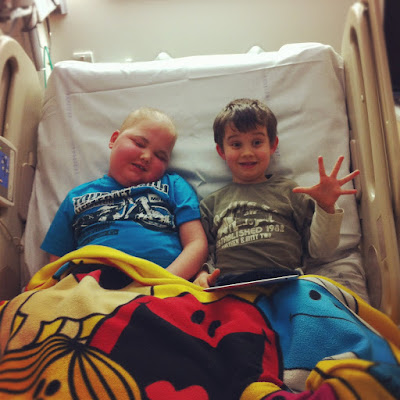 They ate and played games together and we all watched a movie (Despicable Me) then went to our own beds. The next morning Rocky was first on the surgery list and went down fine. The anaesthetists were fantastic and so fast at putting medicine in his cannula while distracting him that he had no time to panic. Our consultant himself carried out the procedure and made small rows of biopsy sites along both sides of the pelvis. He had assured us in advance that the amount taken was dependant on the mass of the donor, not on the needs of the recipient, so that he would only take a small enough percentage of Rocky’s bone marrow that he wouldn’t feel ill or need any blood replacing. As Rocky is smaller than Scooby this would mean that he would have less than the ideal amount to start with, but eventually the cells would reproduce inside his body to the correct amount so it would just take a little bit longer for the process to happen. So Rocky’s marrow was sucked out and then the area was anaesthetised so it didn’t hurt once he woke up. 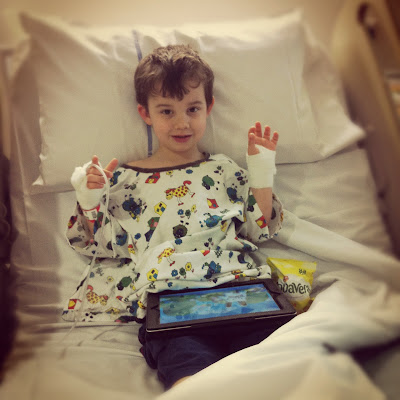 His recovery was quick and straightforward and helped by complete uninterrupted access to the iPad for the next few hours, including Angry Birds Rio which was the thing he had wanted more than anything else. He was kept on fluids until he started eating and drinking and holding it down, which happened soon after, and so he and the iPad spent the rest of the day in Scooby’s bedroom.

A few hours later, the bag of marrow arrived back, having been checked for usable cells and having had all the red blood cells removed (as they are a different blood group) and was transferred through Scooby’s central line straight into his body. It took thirty minutes during which we just stood and stared at every last little drop going through. Later Scooby asked when the rest of his ‘Bow and Arrow’ transplant was going to happen and couldn’t quite believe that it was over without him actually feeling anything! 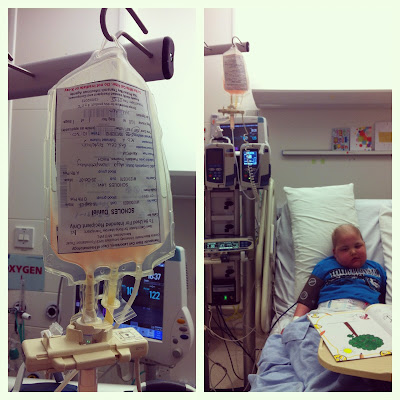 When the consultant came in later he was ecstatic to tell us that thanks to his accuracy in surgery, and some expert precision by the lab workers, the amount of usable cells given to Scooby was actually much higher than expected and rather than it being less than the recommended amount for the recipient, it was actually more which will give him a head start!

Once Rocky’s blood count was taken, he was freed of his cannula and discharged to go home. So Richard stayed with Scooby while I drove Rocky home in the new car which Richard had spent days acquiring from Scotland as our family car had been laid to rest the week before.

So it is done – the act which quite possibly could mean that Scooby’s deteriorating disease is gone forever. Whether it will work, and whether the damage it has left behind is irreversible, we won’t know for a long time, but we know we have given him the best chance possible of it happening.

After a very long time of feeling like we were tumbling down a steep slope – sometimes stumbling, sometimes pausing and sometimes freefalling with no idea how hard the final impact would be – it feels like we’ve hit the bottom and today woke up to start the ascent back up the side of the mountain.

I especially love that when Richard asked Scooby what he wanted to do today, he thought about it and said ‘I want to go out onto the walkway (in the middle of the hospital) in my wheelchair to the end, and then I will try and walk back.’ Richard had to explain that not only could not leave his room for several weeks, but he wouldn’t be able to walk for a while as his body hadn’t been walking for months. Scooby was a bit disappointed, and wanted to at least try standing by the side of the bed to make sure. When he realised his legs couldn’t bear weight, Richard explained he would have to try and retrain all his muscles to work again and so Scooby  is now determinedly doing all the exercises that the physios have been doing with him in the last few weeks. He has taken what we said literally – ‘After the bone marrow transplant, that’s when your body will start to get better again,’ and decided to make it so.

He gets it - the old destructive elements in his life have been destroyed. A sacrifice has been made, blood has been given, and his life has begun again. He knows he’s not all he’s going to be yet and there’s going to be some painful processes of letting that new life taking over every area of his body, but doesn’t want to stay where he was and he wants to start putting this new life into action until he becomes all that he can be, focusing all the time on the goal of going home.

After receiving a day zero in our own lives, why would we ever want to look backwards ever again?
Labels: Scooby Syndrome