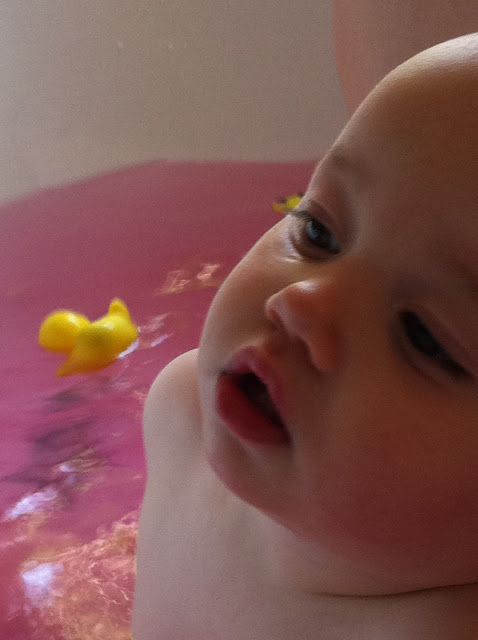 It’s been so exciting here in the last couple of weeks as Baby has suddenly started using words to communicate (yes, I know this is such a ‘parent of small child’ thing to say, but really, it IS so exciting! It’s like having a new toy to play with.)
Two weeks ago her repertoire consisted of: up, mamma (which she uses extremely infrequently), dadda (which she uses extremely frequently, with a little lilt on the end like she’s asking him a question which invariably means everything is dropped as she is picked up for being so cute – yes, he is wrapped around her little finger already), fish (shh!), more, and most randomly Batman, which she heard Rocky chanting one day and decided she loved the sound of it. So much so that as the boys keep experimenting with her, she has taken great pleasure in making them all giggle with it:
‘Baby, say apple.’
‘Batman!’
Giggle giggle giggle.
‘Baby, say chicken.’
‘Batman!’
Giggle giggle giggle.
Baby, say mamma.’
‘Batman!’
Giggle giggle giggle.
However, this week she has started using more words of her own accord. She points at things and says ‘Uh!’ which we think is ‘Look!’. She likes to drop things on the floor and say ‘Uh oh!’ and when giving and taking she says ‘huh-boo’ which is thankyou. Today at the shop I would hand her things, like a pair of slippers, and she would say ‘huh-boo’, then ‘uh oh’ right before she deliberately dropped them to the floor.
She has also learnt the word ‘doggy’ and can make a little woofing sound, but like her eldest brother at the same age, she wants to use it for every animal.
Tonight I read her and Rocky some bedtime stories. One book just had pictures of animals in, so as I turned each page, she responded in the same way.
‘Look Baby, a horse! Neigh!’
‘Doddi! Wuh-wuh!’
‘Here is a duck – quack quack.’
‘Doddi! Wuh-wuh!’
‘This is a pig – (snorting noise that I’m not sure how to spell)’
‘Doddi! Wuh-wuh!’
Rocky was giggling at it all, which was really not conducive to getting them ready for sleeping, but it was fun.
Afterwards it really got me thinking. At the stage she’s at now, watching her get this knowledge and begin to use is just incredible. It doesn’t matter that she’s using the words 90% wrongly – it’s the fact that she’s got them that’s amazing. Her knowledge of what she’s processing is so simple – ‘I think what I’m seeing is a dog. From my experience of the world, this looks like a dog, so it must sound like a dog. Therefore this picture = doddi, wuh-wuh.’ 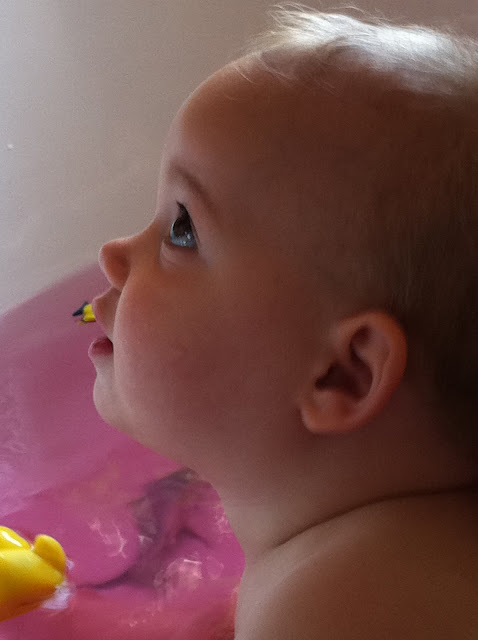 When people find God, the world is like this. What we had once been oblivious to suddenly becomes clear and begins to make sense. ‘Stuff was all around me before but I didn’t know what it was. Now I have started to realise and recognise the hand of God. It looks like God, it sounds like God.’ I imagine God in heaven going ‘Yesssss! She’s got it! Say it again! Fantastic!’
But we’re not supposed to stay in that place. What is an amazing first step is just that – the first step on a much bigger journey. Once we’ve grasped it, it’s time to move forward and learn. That thing over there looks like a dog – four legs, fur, long nose – but it makes a different sound, so it must be something else. It’s a horse. And on we move, learning new depths of experience and texture of this wonderful world around us. What we thought was amazing in the first place (seeing the hand of God in anything at all) becomes part of a bigger picture (seeing the hand of God in many new and previously unseen ways).
What hinders us so much in our walk with God is when we choose (unknowingly) to put God and His works in a box and think we know what is God and what isn’t.
So, for example, some people find God through answered prayer, and in the beginning of their walk with Him they see lots of miraculous provision and positive changes in their life. This is amazing and part of the awesomeness that God brings when we choose Him. But then what if, further down the line, not every prayer is answered? What if the marriage that was restored hits a rocky patch or financial difficulty hits? Some people believe (and teach their churches) that the Christian life is all about victory and prosperity and that’s the only way God works. Keep running after success, no matter what the cost, because that’s what the Christian life looked like in the beginning, so that must be the hand of God. But so often God in His sovereignty works through EVERY aspect of our lives, the good, the bad and the ugly, and we miss Him by refusing to look beyond the box we have put Him in. Within every experience in life there is a rich variety of depths, textures and valuable lessons but we so often miss them because we are looking for something that MUST look like and sound like a dog.
Or if we grew up in a fabulously safe and close-knit Christian community, there is so much simplicity in the early days – ‘If you walk your life like this, it will keep you close to God.’ There is so much truth in that and like a fourteen month old discovering what a dog looks like, it is fine to understand our faith on a basic and generalised level. But as we grow, in age and/or spiritual maturity, there is so much danger in that statement too. For all of us that grew up in Christian families, there will be certain issues that we find difficult to separate between personal choice and the work of God’s hand. We can easily judge other people based on their lifestyle choices and decide that a person who does things we would never do must be in the wrong. We deny the rich variety and individualism that God uses to reach out to every single person uniquely. We shake our heads and say ‘No, it must look and sound like this in order for it to be God’s hand, because that is my experience and my knowledge of Him.’
Don’t we all do that? It’s so much easier as people to categorise things broadly so we know safely what box to put things in, when we actually miss so much in our own lives and other people’s because we are too busy seeing only what we want to see. Let’s not be stunted in our relationship with God and try to fit Him into our limited view of the world! Let’s study Him, walk with Him, turn to Him in the middle of every circumstance, and talk to Him daily. Let’s keep that cute enthusiasm that comes from learning a new word and concept, and turn it to something new every day, instead of holding onto our old and limited knowledge of the truth. Foundations are just that – vitally important, but without anything built on top of them, it’s just an unused car park.
I don’t usually write down my rambling thoughts that come through watching my children learn, for fear of sounding either loopy or trite for spiritualising ordinary things, but it’s one of the biggest ways God brings things to my mind. It’s true what they say, that your children teach you just as much as you teach them. If only I could find the time to write it down each time it happened, maybe I wouldn’t have to re-learn things so often!
Lamentations 3:23